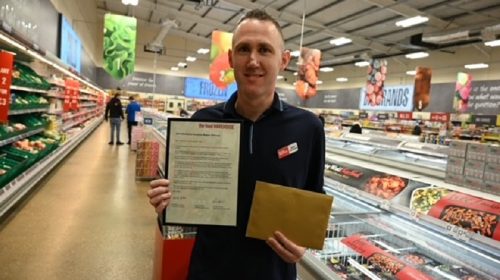 After graduating with a BSc (Hons) in Business Studies in 2005, Casey got what was intended to be a summer job in Clinton Cards in Westwood Cross, Broadstairs. Casey quickly rose up the ranks to become a supervisor and by the time he had finished working for Clinton Cards five years later, he was Store Manager.  “I had no idea what exactly I wanted to do when I left University, says Casey. “I just sort of fell into retail.”

Casey has since worked in a number management roles for high profile retail companies such as Asda and Morrisons. Casey is currently Store Manager for Food Warehouse, one of the larger scale supermarkets run by Iceland, successfully managing an outlet that won a company award for the best retail store in the South. “Engagement is really important”, says Casey. “You have to engage with your staff and care about them as people, not just as employees if you really want them to work well.”

Casey was awarded the British Empire Medal for Services to Retail in the Queen’s Birthday Honours list, 2021. Casey thinks that his British Empire Medal may have come as a result of his response at the beginning of the Covid-19 pandemic. In the early stages of the Covid-19 pandemic, Casey came up with the idea of priority opening to support the elderly and people in need – an approach which was then imitated by so many other stores around the country – as well as galvanising additional support from the local community.

We would like to say a very big congratulations to Casey, who we agree truly deserves his BEM.