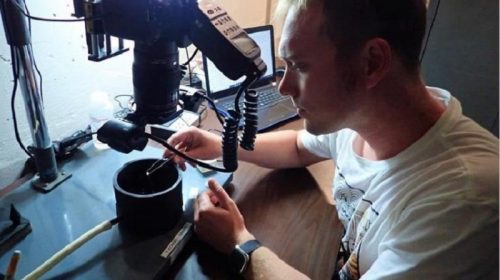 Following his graduation, Chris undertook a Summer Season with Operation Wallacea and then spent eight weeks working in Indonesia at the Hoga Research Station assisting in coral reef conservation.  On his return, he worked briefly as a Science Technician in a secondary school before working in Christ Church in a similar role for three months.  It was during this time that he was accepted on a PhD programme, with a teaching position attached.

Chris’s thesis on the Shining Ramshorn Snail – a rare freshwater snail found in Kent – involved him comparing the genetics of UK populations to populations across Europe to inform conservation of the species .  However, during the process, Chris actually discovered an entirely new species of snail.

During 207, whist attending his first international conference in Delaware, Christ built links with other researchers from the Bernice Pauahi Bishop Museum in Hawaii. They offered him a post at the Museum and a year later, following completion of his PhD, he was able to accept.

Chris is now working on two projects. The first involves extracting DNA from empty snail shells. Using the DNA from the snail shells in the museum’s collection, Chris is able to see how the snail has developed from the past to the current day. His second project, “Geometric Morphometrics”, is a quantitative analysis of the shape of snails to understand differences in species and how their shapes either evolve, or don’t (effectively exploring the constraints to evolution).

Chris has recently had his first paper: Evaluating washing and sifting methods for sampling gastropods in freshwater vegetation samples successfully published in the Journal of Molluscan Studies. He hopes to submit a paper on his discovery of a new snail species in the very near future.