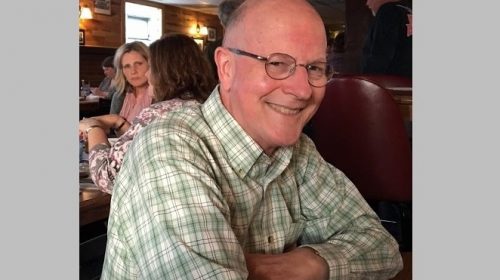 After finishing study at Christ Church, Dick began teaching and, at the same time, studied for a BA in Maths/Education with the Open University. He also got married, having met his future wife standing next to her at the Proms!

Once he had got his BA, Dick decided to take a break from teaching, so took a course in computer programming and moved into Information Technology.

Dick says “I had long been interested in working overseas so I got a job in Toronto, Canada. The company then moved me to Ottawa. After a couple of years, I was asked to join the US operation to help start up the technical side, so we moved to the Boston area. Since the job involved travel, I was lucky enough to see a lot of both the US and Canada.  Subsequently, I worked for other companies, including IBM, and even ran my own business for a few years.  Software Training and Support were big components of my work, so you could say things turned full circle!”

Dick and his wife ultimately settled in a small town north east of Boston. They became citizens so now hold both UK and US passports. They are now retired, with a married son and two grandchildren fairly close by. “Boston is a very diverse city”, says Dick. “Intellectually and professionally it’s very rewarding, but it’s also deliciously full of contradictions and the drivers are notorious!”