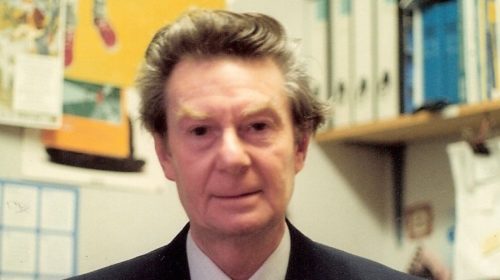 We are deeply saddened to announce the passing of one of our alumni and former colleagues of Christ Church, Leonard Watson, affectionately known as Len.

Len’s long association with Christ Church goes back to 1990 when he studied for his first degree, BA (Hons) English and RFTV Studies, graduating as a very mature student in 1992. Nothing daunted him and after several years Len came back again to do another qualification, a BA (Hons) American Studies with History, gaining a first class honours in 200

Len was then invited back to Christ Church as a Sessional Tutor in American Studies, specialising in 1950s/80s cinema. He retired in 2016 but continued to return now and then to visit former tutors who, he said: “become valued friends”.

We know that this news of Len will be a sadness to many. Our thoughts are with his family and friends.

This is the address given at his funeral in April 2021 by Dr Ken Fox, Principal Lecturer, School of Creative Arts & Industries:

I first met Len when I interviewed him for a place at Christ Church on the Film, Radio and Television degree in the early 1990s. We hit if off straight away. It was a very easy interview. Time passed in a flash as we discussed great Westerns we both loved. Those conversations continued over the years through chats in my office and latterly, via email and telephone. Len loved learning so much he returned to do a degree in History at Christ Church in the early 2000s.

I admired Len greatly. He returned to education as a mature student and blended in brilliantly with all the young things who were around at the time. It must have been very difficult to assimilate but Len’s open and generous nature made his integration with the student population much easier than it might otherwise have been. He did some brilliant work at Christ Church in both his degrees and his final dissertation on the Western was, as you might imagine, an excellent piece of academic writing.

When Len started working with me on the American Cinema module some years later, he and I complemented each other very well. The students were thrilled to have someone with Len’s lived knowledge and understanding of the world and his encyclopaedic knowledge of American cinema. Len was wonderful with the students, encouraging them to speak out in seminars and scaffolding their learning with excellent resources and notes and of course his infectious enthusiasm for film. He was a natural as a teacher. Of course, much to his wife Vivienne’s dismay he was always adding to his voluminous video and DVD collection. In the days before YouTube and streaming services like Netflix or Amazon, Len was a great source of films I was unable to find through other means.

Although we shared an enthusiasm for Westerns there were other types of movies on which we disagreed. There was always lively debate when a new film came out that I thought was wonderful, but Len found disappointing or vice versa. We would bat back and forth with our points and then agree to disagree. What was great about Len was that he would come back to me a few months later and say, you remember that film we discussed, I watched it again and I still didn’t like it. However, he could always see the artistic merits in a film he did not enjoy viewing.

I will miss Len’s enthusiasm for new films, his self-deprecating humour, his humility and grace.

He spoke very fondly of his childhood cinema going experiences and we both shared stories of going to the pictures in our respective hometown cinemas. It was where our dreams were forged.

Len was a wonderful colleague and friend. I was proud to know him and delighted to be able to work with him on a cinema module we both loved.

When cinemas re-open and I start going to the pictures again, Len will never be far from my mind. I will ask what he thought of the most recent film I thought was brilliant (I can hear his diplomatic reply, Ken, that one’s not for me) and what he is watching in Heaven’s deluxe cinema.

It will be my prayer to Len.