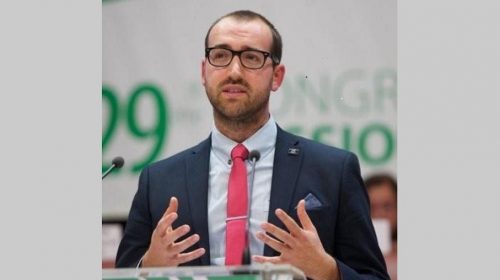 Reflecting on his time at Christ Church, Liam says he loved everything about his course. His favourite area of study was radio and at the end of his first year he got elected to the role of Station Manager on the first student community radio in the country, set up by Christ Church and the University of Kent. Liam also volunteered in the Students’ Union and after graduation, he ran for the role of and become SU President.

It was through working as SU President that Liam discovered how policy could really change people’s lives and how it could be a real force for good. Making a positive impact through policy became his passion. Two years as SU President was followed by a Masters in Politics. Liam became a trustee of the British Youth Council, campaigning for better policies for young people both in the UK and within Europe. Still in his 20s, he became the charity’s Chair, the national face of the organisation. Liam went on to secure a job as Parliamentary and Policy Officer at the YMCA, where he is now Head of Communications.

Liam was awarded the British Empire Medal for Services to Young People in 2021. Liam says he doesn’t know exactly why he was nominated for the BEM – award recipients are not given details of why or by whom they were nominated – but he believes that the voluntary contribution he made to the British Youth Council and also to the UK Youth Parliament, may have played a large part in his nomination.

Volunteering remains important for Liam, and following the loss of one of his daughters at birth, he has also been deeply involved in the baby loss community. Working with another bereaved father, he has recently launched a podcast Dads Still Standing in which the two talk about their experiences of losing their children to provide support to other fathers going through this trauma. The podcast, which is easily available on Spotify and Apple, has already had more than 600 downloads.

“Volunteering is hard work”, says Liam “involving hours of time often away from the family. But, having the Queen and country recognise you in this way is such an honour.”