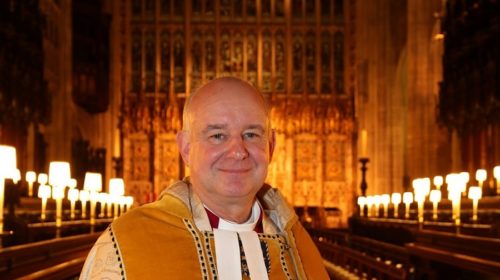 Having graduated from Christ Church, Martin trained for the priesthood. Joining the Royal Navy in 1990, he served in a number of sea-going and shore-side appointments. He served on HMS Raleigh, became the first chaplain to the Commando Helicopter Force, and between 1992 and 1994 served with squadrons in Croatia and Bosnia during the civil war the developed after the break-up of the former Yugoslavia. A later appointment saw hims serving as Chaplain on HMS Invincible, seeing active service in the Gulf.

In 1999 he became the Chaplaincy Team Leader in HM Naval Base Clyde. Whilst here he undertook the Clergy Course at St George’s House, his first encounter with the College and community in Windsor.

In 2005, Martin was appointed as Staff Chaplain to the Chaplain of the Fleet (Executive Assistant), being responsible for the day to day running of his office and the work of Naval Chaplains generally. In he took over as Staff Chaplain (Operations) within Fleet, with responsibility to Commander-in-Chief Fleet for deploying chaplains (including those serving with the Royal Marines). In 2007 he became chaplain to HMS Illustrious.

In October 2010 he was promoted Principal Chaplain and appointed Archdeacon for the Royal Navy by the Archbishop of Canterbury. Being made an Honorary Chaplain to Her Majesty the Queen in November of that year, Martin retired early from the Royal Navy in order to take up his appointment in Windsor. He was installed as a Canon of St Georges Chapel, Windsor with responsibility for the Royal Chapel in the Great Park, and the appointment of Canon Chaplain. In June 2014, Her Majesty The Queen appointed him as Domestic Chaplain in Windsor. At Easter 2016 he was additionally appointed Canon Precentor with responsibility on behalf of Chapter for the liturgy and worship in Saint George’s Chapel.

Married to Diana and with two children. He currently lives within Windsor Great Park.