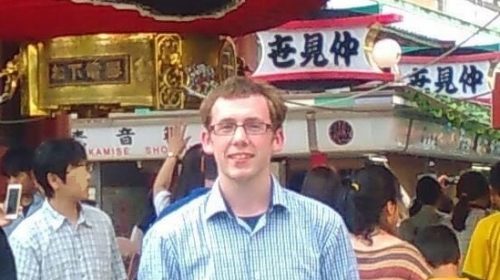 When Michael was studying Music at Broadstairs his intention was always to be a music teacher once he graduated. He wanted to have a stable job to make his living whilst focusing on creating music or working as a musician professionally on the side.

Michael did some work as a session musician after University but realised he didn’t enjoy it as much as he thought he would. “I much preferred the collaboration of working with others and being creative”, he says. Michael had started studying Japanese soon after finishing his degree and so when someone suggested teaching English in Japan to him, he opted for it.

Michael says “I thought it would be an excellent experience and a way I could get my foot in the door of teaching. I ended up falling in love with all Japan has to offer, and now, six years later, I’ve decided that this is my home. I love teaching just as I thought, but now it’s English rather than Music. It might be different from what I first sought out to do, but without a degree I wouldn’t have been able to come here, so I’m very grateful to Christ Church, and proud of my studies nonetheless.”