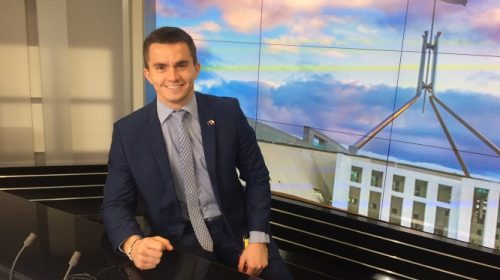 Ondrĕj graduated from CCCU in 2012 with a BSc (Hons) Politics and International Relations. After finishing his Master’s studies in Edinburgh, he returned back to his home country, the Czech Republic, settling in its capital, Prague.

Before joining the diplomatic service of the Czech Republic, Ondrĕj briefly worked with the Police of the Czech Republic and with the Dutch company Philips in the capacity of a Government Affairs Trainee. In 2014, he began his career as a professional diplomat by joining the Ministry of Foreign Affairs in Prague, where he held the position of political secretary to the Deputy Minister responsible for Security and Multilateral Issues.

In November 2017, Ondrĕj departed for his first diplomatic posting abroad. He is currently posted in Australia as Deputy Head of Mission and Consul of the Czech Republic. From April 2018 to February 2019, he was appointed Chargé d‘Affaires a.i. of the Czech Republic to Australia. His general agenda at the Embassy is to represent the political interests of the Czech Republic in Australia, New Zealand and in six other Pacific Island countries. Ondrĕj’s day-to-day duties vary from drafting political analysis, holding diplomatic negotiations, to consular issues and organising cultural activities. He says: “In my position, I have had the pleasure of meeting and working with a number of international people and to visit extraordinary places all over the world, something for which I will always be grateful.”