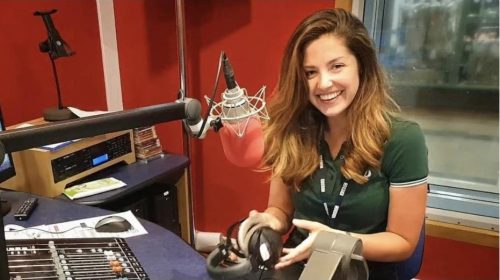 Even while she was studying at Christ Church, Ronni was already finding work experience and making connections, undertaking an internship with ITV Meridian, marketing with the Heart Street Team at venues including wildlife parks and the Kent Show and producing and presenting with Canterbury’s student and community radio station CSRfm.  Listening to two times BAFTA winner and CCCU alumnus Jon Holmes on Radio X, Ronni heard him introduce another former student that she knew. She didn’t hesitate to get in touch and, as a result, gained the opportunity of six months’ work experience at the radio station.

This wealth of experience stood Ronni in good stead after she successfully graduated.  Working for a year at Virgin Radio opened up more contacts that would prove invaluable later on. Ronni left Virgin Radio to pursue a career in the BBC at Radio Kent. Through a CCCU tutor, she was able to make contact with an alumnus working in the BBC and, in December 2016 joined them at Radio Kent as a Presenter/Producer.  Having previously listened to Jon Holmes on Radio X, now she found herself working with him as Producer of a show for which, in October 2018, they were to win a Radio Academy Bronze Aria Award. Later Ronni on-air produced the Sunday Evening show with Daryl Denham.

As a result of Covid-1 Radio Kent has reduced the number of its shows and Ronni is now focused on co-producing the afternoon Drive Time show presented by Pat Marsh. At the same time, she has added another string to her bow.  She has also set up her own business called Vortex Balloon Productions. Her major client? None other than Netflix for whom she edits their UK podcast 10 out of 10 Would Recommend.

During lockdown Ronni, who lives on a farm, has taken the opportunity to study Zoology. Maybe she will be revisiting the Kent Show, or wildlife parks, but this time with something other than marketing a radio station in view!