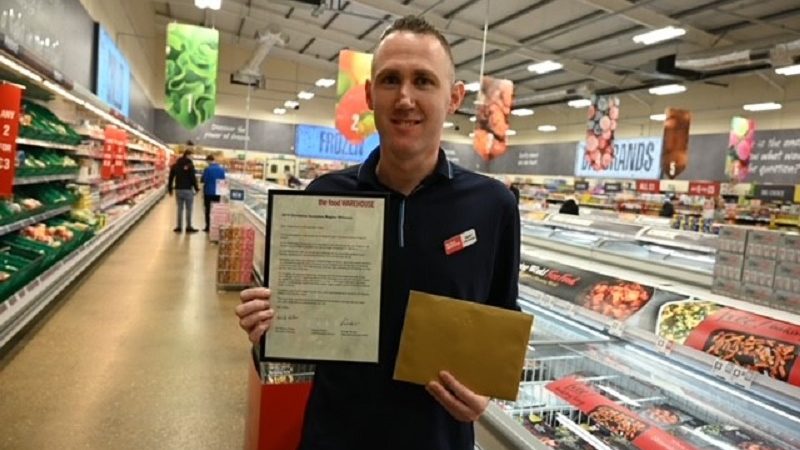 Congratulations go to Casey Abbott BEM, alumnus from BSc (Hons) Business Studies 2005, who has been awarded the British Empire Medal for Services to Retail in this year’s Queen’s Birthday Honours list.

Casey had always had an interest in business, and as he approached leaving school, the possibility of doing further study in that area appealed to him.  None of his family had been to University, but with Christ Church offering a Business Studies course at a local campus, he decided to take the plunge.

After he graduated, Casey got what was intended to be a summer job in Clinton Cards in Westwood Cross, Broadstairs. But, with the opening of the store delayed, he ended up being sent all around Kent. “When I went for the job, the fact I had a business degree meant that they identified me as being overqualified,” says Casey. “They did say they felt that they could do something better for me and so I got pushed up through the ranks quite quickly.” First he became a supervisor and, by the time he had finished working for Clinton Cards five years later, he was Store Manager.  “I had no idea what exactly I wanted to do when I left University, says Casey. “I just sort of fell into retail.”

Casey’s next move was to Asda, starting in home and leisure. “It was a real shock to the system”, he says, “so much faster paced than I had been used to.  After the first three months, I really wasn’t sure I had made the right decision, but the feedback from my manager was that everything was ok.” After 18 months, he was put on managing checkouts. It wasn’t entirely what he wanted to do because he was more interested in products, but the experience of having to manage 125 people was a great learning experience, teaching him how to organise a large body of staff, creating effective rotas and plans. Casey’s Business Studies modules, particularly Managing Through People influenced his management style. He believes in listening to his staff, and gaining group consensus. “Engagement is really important”, says Casey. “You have to engage with your staff and care about them as people, not just as employees if you really want them to work well.”

In 2013, Casey was promoted to Fresh Food Trading Manager. This gave him a very different perspective on working retail because now he was managing managers who knew a lot more about their areas than he did and he had to manage their performance. This necessitated he change his management style. Then, after nine months as a Deputy Store Manager, Casey became Store Manager in his own right, a key moment in his career.

After a year working for Morrisons, which he found to be very culturally different from Asda, Casey secured a role as a Store Manager with Food Warehouse, one of the larger scale supermarkets run by Iceland. “It was quite a whirlwind”, he says, but his success led to the store winning a company award for the best retail store in the South.

Casey thinks that his British Empire Medal may have come as a result of his response at the beginning of the Covid-19 pandemic, when stores were being emptied by customers bulk-buying. Casey came up with the idea of opening the store an hour earlier to meet the needs of the elderly and people in need. The first time they did this, the response was so great that people were queuing up around the retail park to get in. Customers were given individual packs of biscuits and some water arrival as well as a pack of toilet roll to make sure that everybody had some. A local school provided help with bag packing and local taxi firms provided extra support, as did the buses, who allowed elderly customers to use their passes earlier in the day normal. Casey’s store, as well Iceland in Northern Ireland were the first to adopt this priority opening approach which was then imitated by so many other stores. And for that, we all agree that Casey truly deserves his BEM.