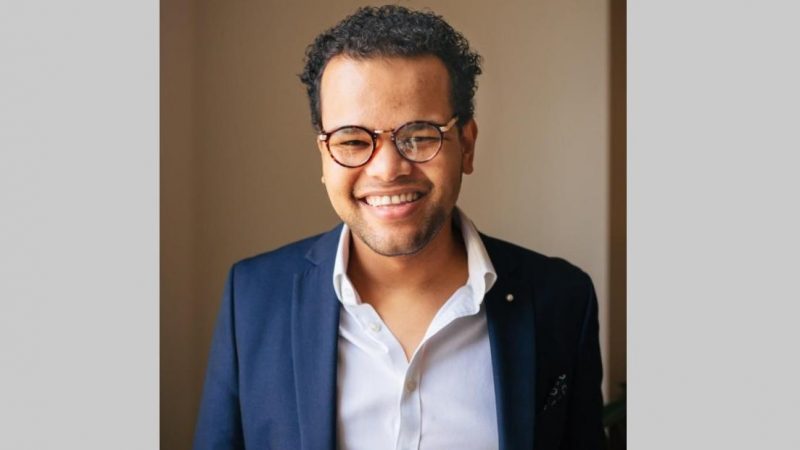 Tremaine Richard-Noel, graduated from Christ Church with a BA/BSc (Hons) Biosciences and Music in 2013. This year, Tremaine achieved a prestigious Forbes Under-30 listing, an accolade which celebrates some of the world’s most entrepreneurial young minds.  We talked to Tremaine to find out how a Biosciences Musician came to achieve such early recognition, linked to his work in robotic process automation (RPA).

Tremaine was always interested in business, but he was interested in a lot of other things as well. “I wanted to be a tuba player, singer, doctor, business owner”, he says. As the first person to go to University in his family, he didn’t have anyone to guide him as he applied for courses, so he applied both for a number of medical courses and to conservatoires to study Music. Then Tremaine discovered that he could study both disciplines at Christ Church.

“Balancing two such varied subjects wasn’t too hard”, says Tremaine.  “What was odd was that I would have random days where one minute I’d be doing chemistry and the next I’d be having a singing lesson.” Following his graduation, Tremaine pursued his interest in business by setting up a music management company, which he ran for about five years. “I managed to set it up by obtaining funding from a startup loan scheme”, he says, “and I first started working with classical musicians. But I realised quickly that that wasn’t where the money was, so then I started working with film composers”. With about 1000 clients and a team of around 30 staff, he began to realise that his interest in business wasn’t actually the business itself as much as a fascination for how large organisations worked. As a result, he became a voluntary Governor in the NHS.

Giving up his music management company, Tremaine started offering consultancy to local organisations who didn’t know how to run a business, or be entrepreneurial, helping them become more enterprising and showing them how to put the necessary structures in place. In 2019, he applied to be a non-executive in the NHS, a role that involved working for three to four days a month. “I was recruited through a national scheme which seeks to bring people with a diversity of different experiences into the NHS.” Tremaine was the youngest person ever to be accepted onto any board of the NHS. He found it so interesting that he decided to specialise in health. He secured a role as Head of Health Care for a company in London that was working with the NHS on how automation could bring more efficiencies.

Six months after Tremaine’s appointment, COVID-19 hit. The technological need in the NHS became so intense at this point that he began to find himself going into the Trust on a voluntary basis every day. In May of last year, the NHS appointed him as their Head of Emerging Technology. He was then approached by NHSX, who drive innovation and technology within the NHS, to put together a £1M plan to trial RPA within the NHS to achieve efficiencies. He now oversees a team of 30 people working across 23 hospitals across the UK.

Tremaine’s team have worked on a number of different projects, one of which was creating automated systems that could monitor the oxygen levels in tanks of COVID-19 patients. Tremaine believes this was probably one of the reasons why he achieved a Forbes Under-30s listing. Launched in 2011, Forbes Under-30s is an annual accolade given to just 30 winners for each of 20 categories, chosen from many thousands of nominees. One of the benefits of his Forbes listing is becoming part of a web community of extraordinary people; Tremaine’s web networking includes acclaimed environmental campaigner Greta Thunberg.

Currently, Tremaine is working on projects to see how automation can help doctors work more efficiently. There are around 80 different clinical systems that doctors can access. Some of these are slow and others are so hard to access that doctors give up using them. Working with an automated bot can help reduce a doctor’s administration load. The doctor simply has to initiate a process and the automation pulls together everything needed to follow that patient to make sure that they get the support and referrals that they need. With over 680 processes to examine and automate, Tremaine and his team must decide which processes to focus on to get best value.

“Banking has been doing this sort of work for over 10 years because the market has driven the necessity for it. But now, because of COVID-19 and the enormous backlogs that have come from the pandemic, the NHS is facing a similar necessity”, says Tremaine. Working in a central hub, Tremaine has to persuade each of the 223 trusts across the country to align with the project and, in 6 months, has already managed to bring ten percent of them on board. The project is also exploring how automation in the NHS could be linked more widely with public sector services. A basic practical example of how this could benefit service users would be that if you advised your local authority of a change of address, the contact details in your medical record could be automatically updated as well.

What started as a 3-month project with NHSX now has no end in sight. Tremaine is also engaged in research work into automation best practice to make sure that the processes being implemented around the clinicians are safe. “It’s easy to do automation quickly, but badly,” says Tremaine.  “And, of course, bots can carry out human errors at bot speed” Pharmacies are another part of the NHS in which Tremaine is interested in how automation can make them more efficient.

So, how does Tremaine feel about being awarded his Forbes listing? “It feels like it’s an achievement for the whole team”, he says, “because everybody is so happy that I got this recognition. It has certainly made a lot of difference with job offers, but I haven’t been tempted to look elsewhere because what I’m doing, being able to work across the whole of the NHS quickly, is just amazing.”

It’s a great achievement and we wish Tremaine every continued success for the future.

0 comments on “Forbes Under-30 listing for Tremaine”