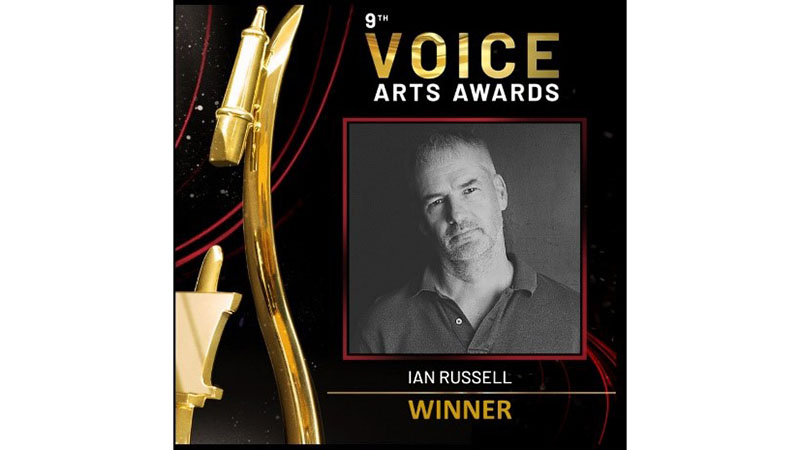 Fresh off the heels of winning the 2022 Society of Voice Arts and Sciences award for Outstanding Audio Description – Museums & Cultural Sites – International – Best Voice Actor for his role narrating the audio guide to Holbein Capturing Character in the Renaissance for the Getty Museum, we caught up with PGCE-alumnus (1984) Ian Russell for a trip down memory lane. Read on to hear the winding road Ian travelled to become the successful voice actor he is today, how his time at CCCU helped shape that journey, and his top tips for those looking to break into the industry!

How did you get into voice acting?

As a younger man, I had failed in an attempt to be a ‘proper’ actor.

I therefore got my Postgraduate Certificate in Education from Christ Church and landed a job in the Northwest of England as a teacher. About two years in, I figured it probably wasn’t the vocational career that I wanted it to be, so I went and auditioned for a local theatre school in Liverpool. They accepted me onto their three-year course, but I couldn’t afford it, so I didn’t go.

I continued as a local community theatre actor and helped run a not-for-profit called Matchbox Theatre. We entered local festivals and took shows to Edinburgh in the hopes that somebody would discover us, but it didn’t happen.

Twenty years later, I was working in a bank. My wife knew about my past in acting, so on Christmas day, 2012, she gifted me a one-day ‘Introduction to Voiceover’ course in London. She thought it would be fun, but little did she know, it created a whole new world.

What has been your favourite voice role to date, and why?

Probably the most recognised would be Vernon Locke in the videogame Payday 2 which is a big game franchise, with 9 million players worldwide. I’ve been playing Locke since 2015, so he’s been a part of my life for 7 years. When you book a role like that, that people know, it helps open doors. If a gaming company has a choice between two actors, and the performances are of equal quality, it helps if one has an existing following among video game lovers on social media to promote it to, for example. So that’s the most influential.

In terms of fun, I’ve done a fair bit of work on Everguild’s Warhammer games, which are online card games. Every card that gets played will have a voice line, so they need dozens of characters. I did 14 for their first game, 4 more on their second, and I’ve just been asked to do another 14. A lot of orcs and goblins, which is always vocally entertaining!

Is there a dream character you’d love to lend your voice to?

I tend to set goals around things rather than people, and they’re often about what I haven’t done yet. So for example, this year I wanted to work for one of the big streaming giants, which I got to do, voicing a promo for a show on Amazon Prime. I have also long wanted to voice a character in either Lord of the Rings, Game of Thrones, or Harry Potter, and this year I am a Nazgûl-type character in an indie game set in Middle-earth. So that’s Lord of the Rings ticked, but I’m still working on the other two. Oh and I’d love to be in a Star Wars title, that would be exciting!

Tell us about your time at CCCU, what is your fondest memory?

One of my good friends I made there, Liz, studied Drama, and came from the Northwest of England. When I was searching for jobs, one of them was for a school in Prescot, so I asked her if she knew anything about it. She said, “That’s where I went to school!” And so I applied, I got the job, and that’s where I got involved with local theatre. It all grew from there. Without having met Liz at Christ Church, none of the rest might have happened. It all comes back to the people you meet; they influence who you are and who you become.

What does being part of the CCCU alumni community mean to you?

It was the last full-time educational institution that I attended before I went out into the big wide world, so there’s a warmth that I feel for Canterbury as a city and the University as an institution. I had three years at Norwich and less than a year at Canterbury, and looking back, Canterbury was much more a home than Norwich ever was. I loved Norwich, but at Canterbury there was a sense of a line being drawn that I could never step back across, and that more intense, close-knit community that I found myself in for that moment made it quite special.

My 16-year-old has decided she wants to study at a UK university, and Canterbury is one of the places she’s looking at. She’d never admit it but the fact that I’m an alumnus is a factor for her – if Dad went there, it can’t be that bad!… So there’s a legacy element to it too.

What made you agree to be interviewed today?

The teacher part of me. The giving back part. I’ve got to a point in my career that I’ve done enough and been successful enough that I think I can share what I’ve learned, and it might make some sense to people. As a reasonably successful voice actor, I feel I’ve figured the industry out and I can pay that knowledge forward. And if I’m going to do that, I should do it through places that I have some connection with, and Christ Church is one of those.

What one piece of advice would you give to aspiring voice actors?

Voice acting isn’t one industry, it’s a whole bunch of small industries under the umbrella of voice acting.

To start out, you need:

A place to work: An environment where you can control the noise and produce decent quality audio recordings.

To be able to perform in one way or another: Not everybody is suited to everything – there’s the more dramatic end, which is the video games, animation, audiobooks and audio drama; and then there’s the narrator end, which is corporate stuff like e-learning; the “real world” as opposed to fictional universes. Being able to do both is less common, because there’s different skillsets required for both.

To be able to run a small business: Only 20% of what you do is actually performing. The rest is accounting, marketing, client management, research. This is what most people find the most challenging, but the best way to do all of that is to find someone who can teach you – nothing is unlearnable.

“Voice acting is solitary, but it’s not lonely – because there’s so many voices in your head!”