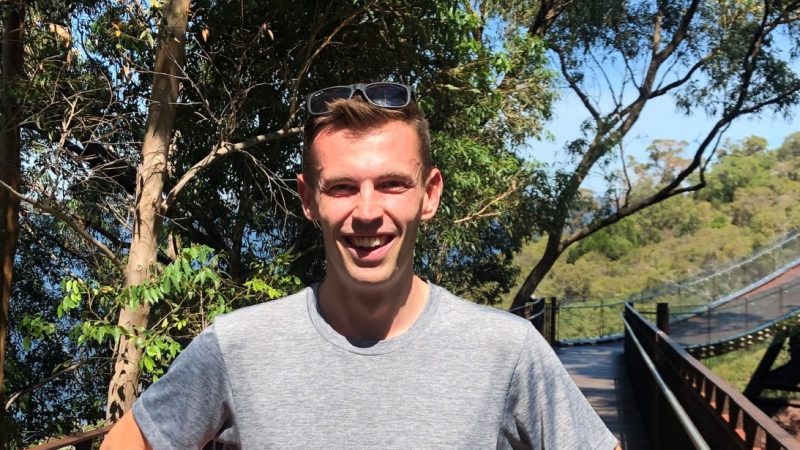 A graduate of BSc (Hons) Sport and Exercise in 2018, Jack Rolfe’s view of his experience to date couldn’t be more positive: “I’m living the dream”, he says. As we interview him in Australia via Zoom, sitting in the bright sun, it looks like he’s right. It’s winter in Australia and a pleasant 25oC.

Living and working in Australia for a year has offered Jack many benefits, one of which has been more opportunity to focus on his business, The Coaching Lab. Now in its second year, The Coaching Lab supports coaches across the sporting landscape with consultancy and development as service offers, but the MatchPlay card series is Jack’s biggest area of focus. MatchPlay comprises a series of multi-sport challenge cards that promote creative and collaborative working, asking players to make in-game decisions and engage with their game from different viewpoints to #ChangeTheGame. MatchPlay cards are now used across 25 countries in varying sporting settings from grassroots through to performance environments at Arsenal FC Academy and England Hockey.

The idea for The Coaching Lab was born directly out of the work that Jack did for his degree. A talented hockey player, the work placement he undertook at Kent College as part of his University course gave him solid coaching experience, while preparation for his dissertation gave him the opportunity to interview four different hockey coaches, and to spend time at Reading Football Club Academy to interview their coaches. The focus of Jack’s thesis was how build psychological skills into coaching practices. “It’s really important not just to look at the theory, but understand how to put it into practice. That was something that was instilled into me at Christ Church almost from day one”, he says.

As a concept started to come to life, the first set of The Coaching Lab MatchPlay cards was produced on paper with the help of the Christ Church Design and Print team and some dexterous scissor work by Jack. Someone suggested that he produce them on plastic and build a platform for purchase, so he commissioned a company in China to do the work. “I had no idea what I was doing really”, he says, “and – at that stage – that was no bad thing. It meant I just got on a did it.” Jack then set up his own website to promote the cards. Six weeks later, he had sold 100 packs and the business has continued to grow since then.

Jack is clear why he chose Christ Church as his place of study. Initially interested in taking a teaching course, he came to a University open day where he met Principal Lecturer Andy Balsdon (also father of alumna Grace Balsdon, who plays hockey for England’s women’s team). Andy’s interest in Jack and the information he provided about Sports and Exercise Science persuaded Jack that this was the course he needed to do. “I felt comfortable and valued at Christ Church”, he says. Although he graduated very successfully (including a first for his dissertation) studying presented many challenges for Jack, who is dyslexic. He pays tribute to the help given to him by the Student Support Team. “Once a week, a legend called Janet would go through my work with me and help me organise my words”, he says. “She didn’t know anything about Sports Coaching which was great because it meant she could tell me when what I was saying made absolutely no sense. She gave me a lot of her time and I don’t think I’ll ever be able to thank her enough.”

So, how has Jack come to be spending a year in Australia? “I met a colleague while I was on placement at Kent College who came from Perth. He helped me get accommodation out here during the summer vacation at the end of my second year.” While visiting Australia, Jack played hockey and met legendary hockey champion Jamie Dwyer, the winner of Olympic gold, two Olympic bronze medals, three Commonwealth gold medals, World Cup gold and five Champions Trophy tournaments. They stayed in touch and, two years later, Jamie offered Jack a job. Jack now works for Jamie Dwyer Hockey (JDH), branding, managing social media, sales and also undertaking some coaching.

So what does the future hold? With The Coaching Lab having been featured in Match of the Day Magazine, and now being recognised by Virgin Startup, who are now offering solid business support, Jack hopes for more business growth and a move to self-sustainability. He is also looking forward to the outcome of the Kent Business Awards where The Coaching Lab has been shortlisted in two categories: Innovation and Start-up; the award winners will be announced in November.

Jack’s advice to others seeking to forge their own path as he is doing emphasises the importance of the transferable skills he learned while he was at Christ Church – time management, adaptability, the ability to talk to and network with others, self-organisation and self-belief. “Believe you can do it”, he says, “both by knowledge and by taking up the opportunities that present themselves to you.”