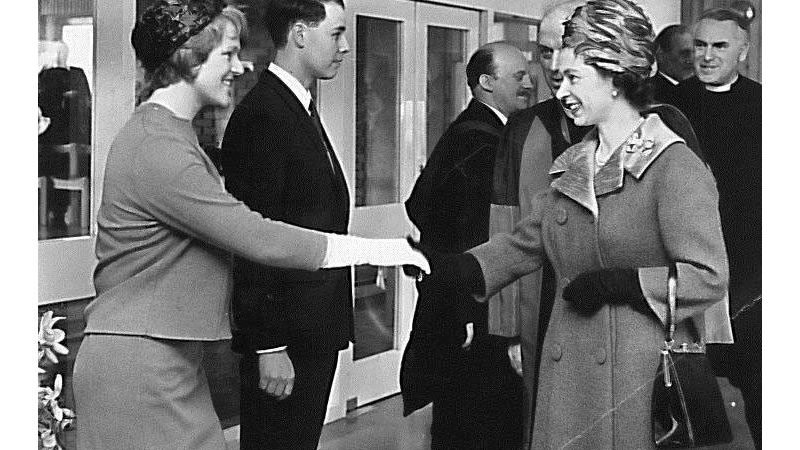 In 1965, Her Majesty the Queen was due to distribute the Maundy Money to the elderly citizens of Canterbury that Easter. At the same time, while visiting the city and as head of the Church of England, it was considered fitting for her to visit Christ Church College as the first new Church of England College for many years, to see the chapel and to open it officially. At the time, I was Vice-President of the Students Union at what was then known as Christ Church Teacher Training College.

It would take place during the College’s Easter holiday but Richard Bradley, as President of the Students Union, and I as Vice-President were asked to attend. It was also proposed for Dr Mason as Principal and Richard as President to show the Queen around the building and for me to accompany the Duke of Edinburgh.

As I watched the maroon royal cars coming down the college driveway, I felt incredibly nervous. But once the Queen was inside the building and meeting Dr Mason, my shyness fell away, because I had a job to do.

Dr Mason may also have been nervous, because he muddled up the arrangements and instead of Richard accompanying the Queen and the Duke of Edinburgh being with me, I found I was accompanying the Queen. Although I had thought about what to say to the Duke, I was overcome with the idea that, if I initiated any introduction to the Queen or spoke before she did, that she might suddenly say ‘Off with her head’ and have me hauled away and decapitated on the spot. Ridiculous, of course. But the ‘Alice in Wonderland’ thought was there and no matter how much Dr Mason hissed his ‘introduce so-and-so’ instruction in my ear, the thought persisted and I couldn’t and I didn’t.

Much of the rest of that day is now a haze. I do remember how the Queen seemed to take real pleasure from her visit to the college library and having the time to look at some of the children’s picture books that we had there.

We were asked to gather in the hall, where Peter Jenkins, the previous year’s President looking almost cherubic, read the address to welcome the esteemed visitors.

I remember, with a smile, how we were seated on rows of chairs in that hall, the Queen and the Duke in the front row with the Archbishop of Canterbury in the row behind, and me either in the same row or the next one behind. While the Archbishop, Dr Michael Ramsey, waited for the Queen to be seated, he placed his hand on the vacant seat of the chair in front to steady himself, only for find the Duke lowering himself onto that chair.

He whipped his hand away very quickly, but not so quickly that the Duke didn’t see his hand there with its ceremonial amethyst ring on the middle finger of his right hand. Very quietly, Dr Ramsey bent his head forward and whispered to the Duke ‘You’re supposed to kiss it, not sit on it.’ The Duke of Edinburgh just grinned.

Lorna Daymond, from the Class of 1962 – 65, one of the first education students and our first alumni cohort.

View footage of the Queen’s visit here, filmed by the Student Film Unit, which gives an overview of the occasion and a rare look at the campus as it was.

I do remember how the Queen seemed to take real pleasure from her visit to the college library and having the time to look at some of the children’s picture books that we had there.