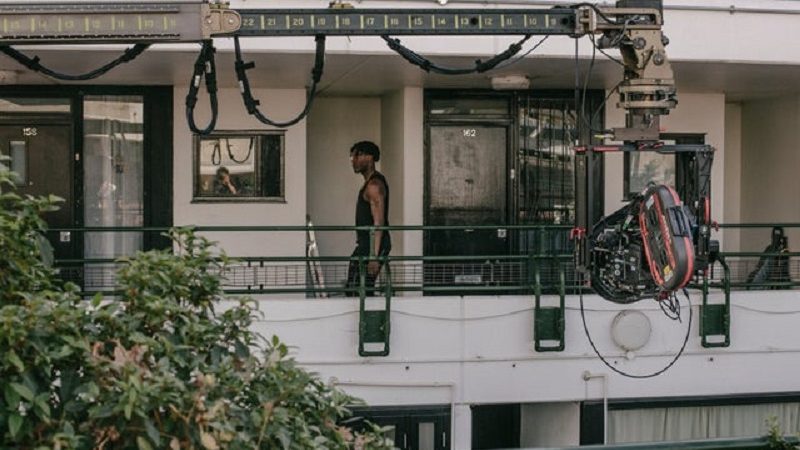 Aimed at capturing a ‘slice of life’ in a London housing block, it was filmed on 35mm, using a 40ft technocrane. Quoted in the Evening Standard as ‘a beautifully realised examination of the area and its residents”, Tin Luck was nominated for Best UK Short at the Raindance Film Festival.

Katie says: “Beatrix and I were working on another short film when she approached me with a film idea from a competition that she had won. The prize was to use a technocrane for a one-shot story and immediately I was on board as it is exactly this type of filmmaking I love. We teamed up with Pundersons Gardens and another independent producer, Martha Bailey, to have an ‘all hands on’ team as this was a mammoth film to pull off.

“The challenge was how to make a narrative fit into nine minutes, in the confines of a one-shot, using a crane that sweeps. You get a little bit of each character in the community from every window and, in the buzz there’s a connection between people. Traversing age, culture and gender, Tin Luck becomes a timeline of one community’s influences and the individuals within it. In this way we began to develop the documentary/ fiction blend it would become.

“It became clear how despite, the gems of talent in Maiden Lane, its past reputation and lack of government impetus was holding that talent back from being recognised. Themes of boys without fathers around pushed Beatrix to deconstruct the pressures and perceived stereotypes of the guys who lived there to highlight what they actually had to deal with.

About ninety percent of the cast was from the community or friends of the community, including Sam Adewunmi, BiFA award winner for Best Newcomer, whose feature film The Last Tree was nominated for grand jury prize. A story was built between Sam Brown (1st rapper) and Awate (2nd rapper) to deconstruct the pressures on them and look at how they could break the ceiling constructed by their surroundings; pressures of growing up too fast, looking after younger siblings, being arrested wrongfully multiple times so that you have to actually sue the police (Awate).

From the sound department down to the grips everyone said this was technically the most complicated task they’d ever undertaken. The sound department had to radio mic and collect the signals of over 15 mics, as well as collect foley and ADR in breaks – and all practiced and shot in half a day with only four takes! We had a crew and cast adding up to 50, the majority of whom were not professionals, and small issues like: ‘how the hell do we get this two-tonne crane past a van that’s inconveniently illegally parked itself in our way?’ Stress at times like that were at a peak. But there’s something to say there, too. That day we really created our own community.

“Tin Luck is a representation of Maiden Lane, and wider. British communities that have so much to say, but have very little airtime other than a BBC gritty drama. The crossing of air in Tin Luck is thick with commentary even if the words aren’t there. But if you listen into the raps, they reveal what the characters themselves, can’t.”

Tin Luck is available to watch for free, or with a £5 donation, until November 7 at cinema.raindance.org

Find out more about the School of Creative Arts and Industries

Tin Luck is that representation of Maiden Lane, and wider. It’s British communities that have so much to say but have very little airtime other than a BBC gritty drama.