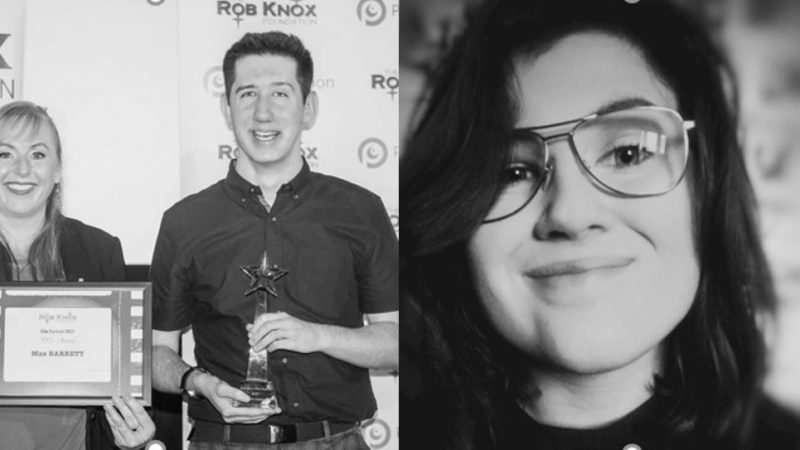 New Film Production graduates from the School of Creative Arts and Industries have hit festival success within six months of graduating.

Film Production alumni Maisie Vickers and Max Barrett independently won awards in London and Russia. This is the first cohort of Film Production graduates at Canterbury Christ Church University. The new degree is in a suite with Film, Radio and Television (FRTV) and Digital Media.

Max won an individual award for a ‘new and upcoming filmmaker who is having a positive impact on the local filmmaking community’ at the Rob Knox Film Festival in Bexley, south east London. The award was for his second-year film, Franco, which was written by fellow alumnus Dan Feakins and included fellow graduates, Lewis Kennedy, Tom Maxwell, Adam Young and Harry Munday.

Speaking about the idea behind his film, Max said: “We created Franco from a deeply personal story, four days before a pandemic that would alter the world and the journey of this film changed my life.

“This team came together in the most incredible way to share a unique vision during unpredictable times.”

Like Max, Maisie graduated this year and entered her second-year screenplay ‘Bunker’ into the ‘International Short and Symbolic Art Film Festival’ (ISAFF) based in St Petersburg in Russia. By being among the winners, Maisie’s screenplay will be shared with festival members. She couldn’t attend the festival but when she heard about the award, she noted: “I entered fairly close to the deadline, so it was a very quick turnaround. I was surprised yet honoured my work was being recognised and I hope to enter more festivals like this in the future. It has also inspired me to write more and be more involved within the screenwriting community”.

Senior lecturer and second-year film tutor, Liz Samson commented on the students’ success. “I had the privilege of working with both Maisie and Max whilst these projects were developed,” she said.

“Both students were always enthusiastic, understood the importance of creativity and had the ability to practically realise their projects to an extremely high standard”.

Suite lead and senior lecturer, Eddie McMillan added: “It’s always a thrill to hear of our student’s successes. Both Maisie and Max were excellent undergraduate film students who dedicated their time to working hard and developing their specialist interests. Winning festivals is the icing on the cake and clearly advertises their talent and by extension our teaching practices”.